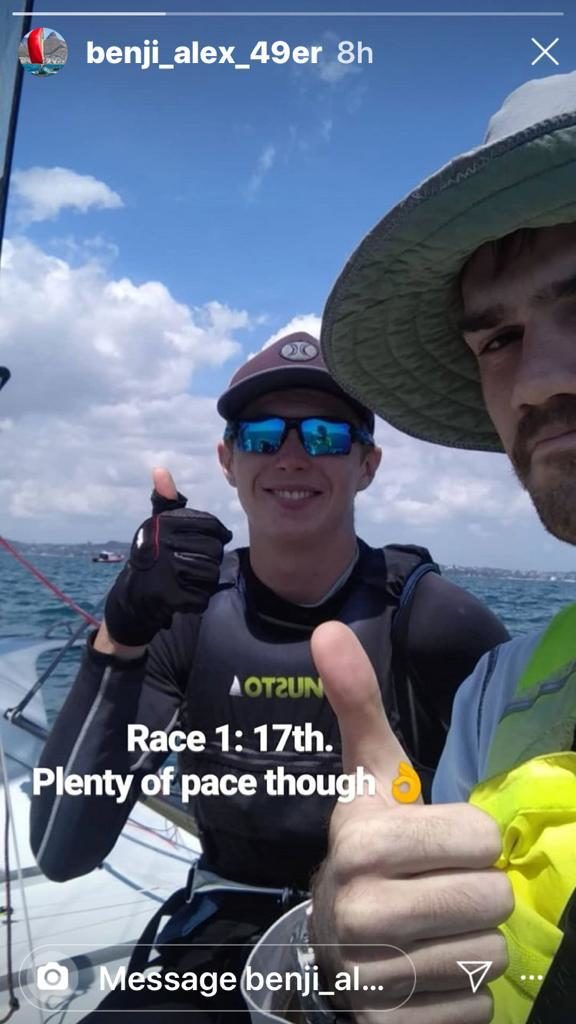 Benji Daniel – with his spirit up again and rearing to go.

One thing the landlubbers out there need to understand about top quality yacht racing is simply this – it’s a tough, very tough business, and one has to be as mentally tough as one is physically strong! And that’s what our 49er Olympic hopefuls found out yesterday.

But that was yesterday, and with their troubles behind them they gave their manager/coach/RIB driver the best birthday gift ever – 3 good races without any problems or damage. Happy birthday Alex Lehtinen – and well done to the guys for having the mental ability to bounce back from such a dreadful day after a spreader breakage left them scoreless in four races.

Our man on the spot and birthday boy Alex Lehtinen said that today was moderately uneventful – an understatement if ever there was one!

“The boys put in three races today in relatively light but steady winds. The conditions meant that it was difficult to make big gains through the fleet – putting huge emphasis on starts and getting out clean. Their results, an 18, 25 and 13, were almost perfect representations of their starts.

“They certainly had pace and high accuracy on strategic calls which are encouraging, but nothing quite as impressive as their demeanor and attitude. Many were concerned about their ‘spirits’ and their ‘heads’, but they were going about their boat like it was just another Thursday to file papers in the office!

“It was an unfortunate time for their hot starting streak to have a stutter – but the lessons learned are definitely equally valuable and hard to learn anywhere else except trying to start between two veteran Olympians.

“A surprisingly uneventful day otherwise for the team, despite hopes and dreams being dashed around them. Another beautiful day on the water in Auckland – it’s a good place to be” he said. 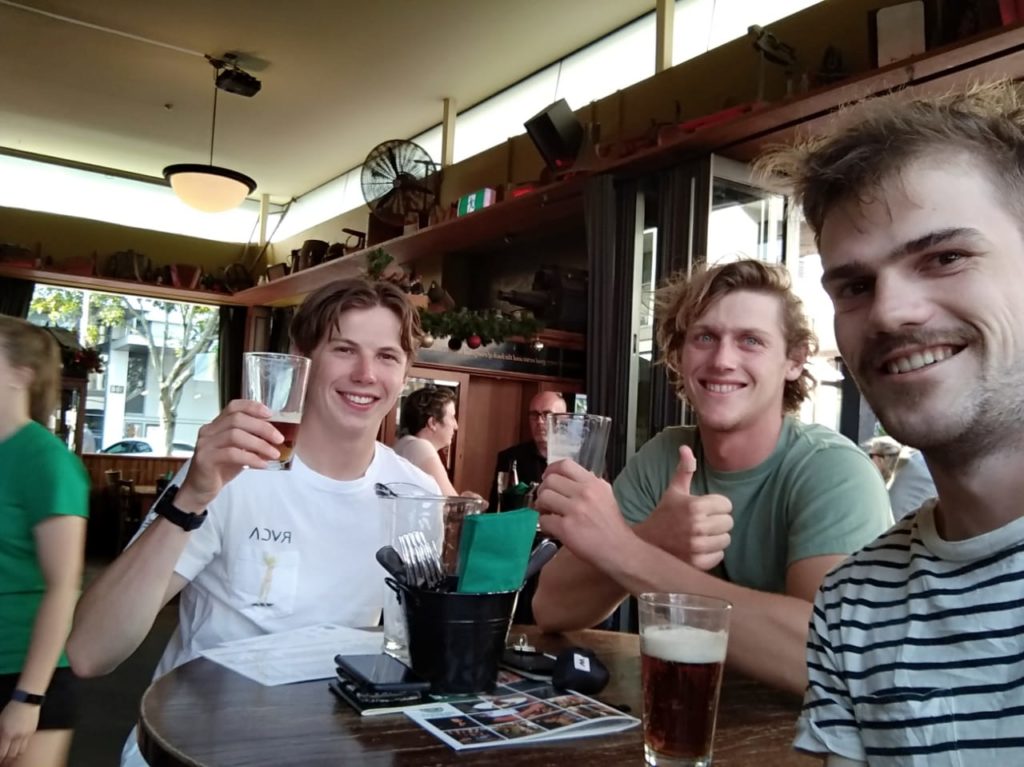 Some R & R after racing for Benji Daniel and Alex Burger after a very tough day yesterday, and 3 races today. Plus celebrations with birthday boy Alex Lehtinen.

As I said yesterday, these guys are tough, both mentally and physically, and that they should bounce back. For them their high hopes of a good overall placing have been dashed, so all that is left now is for them to go out in the final races and do their utmost to win the Bronze Fleet.

The support these guys have back home is massive as we would all like to see our RSA 49er guys in the Olympics next year. This message of support, and one of many, caught my eye, and is worth sharing:

Gents, (with apologies to Rudyard Kipling):
If you can meet with Triumph and Disaster
And treat those two impostors just the same;
If you can force your heart and nerve and sinew
To serve your turn long after they are gone,
And so hold on when there is nothing in you
Except the Will which says to them: ‘Hold on!’
If you can fill the unforgiving minute
With sixty seconds’ worth of distance run,
Yours is the Earth and everything that’s in it,
And – which is more – you’ll be a Man, my son!

Give it your all today! We’re with you in spirit!