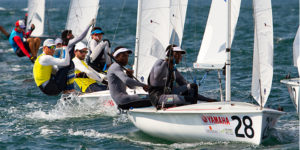 Their dreams of a top 20 result were not realised, but a lot of good has come from this event – especially when one realises that Asenathi Jim, and in particular crewman Sibu Sizatu was competing at this level for the first time.

They made the Gold Fleet cut-off, and had some really good starts – two vital ingredients for success. Plus they had loads of big fleet experience.

Being a lightweight combination the wind on the final day was probably not really to their liking, being in the 12 – 14 knot range.

Overall they were in the top half of a tough international fleet with competitors from 32 nations, so the future must surely be bright for these two young up-and-coming Black sailors who are undoubtedly the most exciting dinghy racing pairing since readmission.

Regrettably the RSA women of Tammy Holden and Lea Smit did not fare well at all, finishing last in their class. But at least they have experience what is required to compete with the very best in the world.