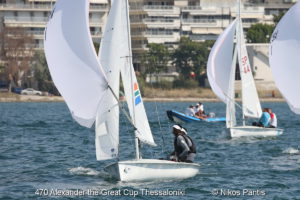 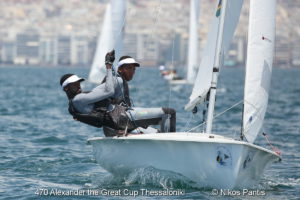 The exciting young South African pairing of Asenathi Jim and Sibu Sizatu are a little on the light side, so when the wind is up they are unlikely to perform until they master the technique of strong wind sailing.

Yesterday had wind which was almost at the limit of their range to be competitive, yet they sailed exceptionally well and managed to hang on in a really talented fleet of Olympic medalists and world champions. The venue is known for being a light wind venue, so our team are hoping that the lighter winds prevail soon, as this is when they may well just stretch their legs. Let’s hope so anyway.

Their coach and mentor Roger Hudson was very, very chuffed with their performance in the first 3 races with results of 4; 6 & 12 in the 3 races sailed on the first day. And as a result of this performance so far they are being ‘talked up’ right around the world – and they deserve it too.

Asenathi Jim has come a long way since he competed in his first international event, the 2010 420 World Championships, including racking up two Olympic appearances in London 2012 and Rio 2016 with crew Roger Hudson. Here in Greece, Hudson has switched to coach and Jim, or ‘Squirrel’ as he is more affectionately known, is racing with Sibu Sizatu who was Sailing Magazine’s Sailor of the Month in March 2016. Sizatu is competing in his first ever 470 World Championship having passed through an intense selection process.

“We are a big group and as in the past members get nominated to compete at international events,” explained Jim on the selection system within the South African 470 squad. “There will be new faces every time, as we never know who is the perfect fit and we are training together so hard and everyone deserves a big event like this.”

“It wasn’t easy to be selected to compete here,” continued Sizatu. “There are a lot of crews back at home and I am one of the crews, but we needed a lighter team to come here and we had a trials and I got the slot. It is a really good feeling to be here. It was very stressing,” he explained on facing his first 470 Worlds starting line. “There were tights situations and I was quite nervous as well. I am really pleased about today.”