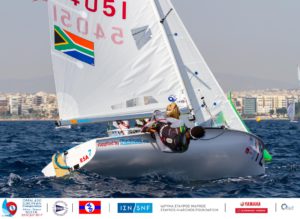 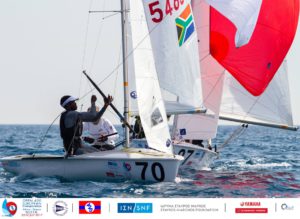 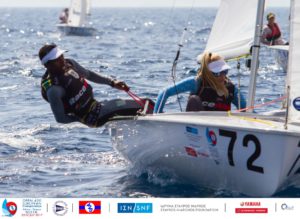 A very tricky and indecisive breeze played into the hands of light-wind specialists on race day 1 after 179 teams spent the morning ashore after light wind postponed the scheduled start.

In the early afternoon thermal breezes filled in, with the Open fleet in which the RSA teams were competing, being called out to the race track first.

There is not a lot of info forthcoming from the event on our RSA sailors performance, but one has to mark them down as ‘satisfactory’ after the opening 2 races.

Neither of the two teams have ever raced together, so these were new combinations looking to learn about each other and understand how the other reacts to situations on the race course – especially the pressure.

Asenathi Jim, with a wealth of close quarters pressure racing at the highest levels seemed most at home with his new crew Elsje Dijkstra, and put in two solid performances in the light conditions – scoring a 5 and 12 to put them in 11th spot overall.

Michaela Robinson and Sibusiso Sizatu finished the day with a 27 & 28 to be 57th overall. While Michaela has previously shown BMT in the Mirror class, racing 420s is very much faster and cut-and-thrust. Given some time in the boat and this competitive fleet, there is no reason why they will not improve their score line.