29er Worlds. RSA Moving UP the Podium to 2nd Overall 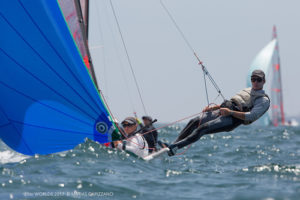 After starting the event in 3rd spot after the first 3 races, our RSA team of Benji Daniels & Alex Burger have shown loads of BMT in this 129-boat fleet as they moved up overall on the scoreboard to 2nd after an additional 2 races on day 2.

That’s a phenomenal achievement as the 29er is not a boat sailed in any great numbers in this country, so their ability to practice against others locally is seriously curtailed. But, they have ability which is shown by the fact that they have just 1 race outside the top 10 in their first 5 races.

Here’s how the racing went on day 2.

Fluky winds that refused to settle teased sailors and organizers alike. As winds ultimately crystalized and built – up to 10 knots at times – Bravo Course squeezed out three races, while Alpha Course completed two.

Argentina’s team of Santiago Duncan Loias/Elias Dalli climbed a notch to the head of the leader board; followed by Benji Daniel/Alex Burger of South Africa; and Neil Marcellini/Ian Brill, USA. New Zealand’s Seb Lardies/Scott McKenzie dipped to fourth place, due to a 27th place finish in Race Four; but are still just 20 points out of first place.

The Zhik 29er Worlds are host to 129 competitors from 17 nations. Qualifying races continue tomorrow, August 2, in the waters off Long Beach. The finals will be held on Thursday (August 3) until Saturday (August 5), and are scheduled to consist of 10 races.