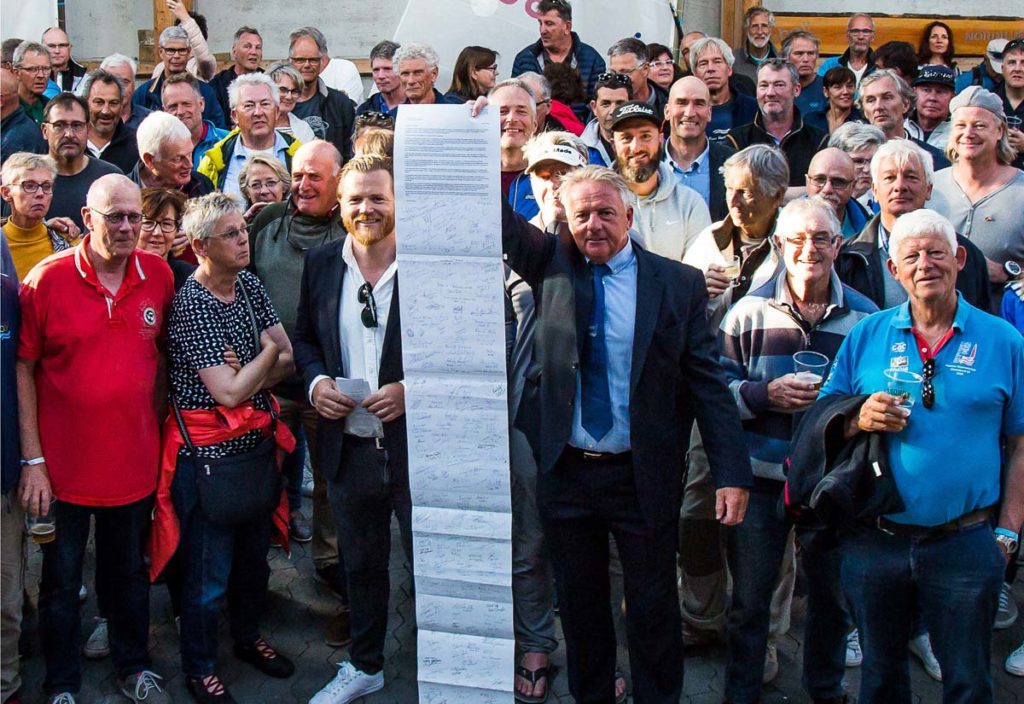 More than 300 Finn Masters, friends and supporters at the 2019 Finn World Masters have sent an open letter to the President of World Sailing, Kim Andersen, to express their concern about the decision to drop the Finn from the 2024 Olympic programme.

The Finn World Masters, which has attracted 262 entries from 28 nations, was opened last night (Sunday) in Skovshoved, Denmark, and is being organised by Mr Andersen’s own club, the Royal Danish Yacht Club.

Following the controversial decision made by the World Sailing Council in November 2018 to drop the Finn from the Olympic programme, and the voting scandal surrounding that decision, we respectfully ask that you support, by whatever means necessary, the return of the Finn class into the Olympic programme.

We are all writing to express our concerns at the following:

• Contrary to World Sailing policy and IOC guidelines, the removal of the Finn means that sailors above 85 kg are now discriminated against in Olympic sailing. Following the loss of the Soling and the Star, the Finn was the last remaining boat suitable for heavy sailors. Data from the 2018 Aarhus Sailing World Championships shows us that Finn sailors are unique in the current Olympic classes with body weights above 85kg.

• The removal of the Finn sacrifices perhaps the most athletic sailing class within the Olympic programme, and one that is most closely aligned to the Olympic ideals. Sailing should be embracing and marketing the bigger sailors, not discarding them. What other sport would miss this great opportunity?

• After the 2020 Olympics there will be no events at all in the Olympic Sailing programme for male athletes over 85kg so these athletes will be lost to Olympic sailing. Even the Mixed Offshore Keelboat will inevitably favour athletes of lower body weight.

• The Finn class has the greatest pedigree, history, and heroes in the sport of sailing. To remove it from the Olympic programme would be a massive loss for the sport. The class creates huge media interest because of its heritage as well as because of its athletic and powerful sailors. Its legacy can be seen right across the sport. To remove it from the Olympics is a huge risk to sailing and the IOC.

• The removal of the Finn breaks a long held and vital pathway from youth classes to America’s Cup and The Ocean Race. Once sailors grow too large to sail a Laser, and many do, there will be no further step within Olympic sailing. The pathway is broken.

It is perhaps worth noting that never in the history of the sport of sailing has there been so much anger, frustration and disaffection at a decision made by World Sailing. Taken in the context of a number of other recent criticisms of World Sailing, it would appear to us that many changes have and are being made against the wishes of a large number of sailors worldwide.

Removing the Finn from the Olympics will disenfranchise a huge group of sailors across the world from Olympic sailing, and indeed from World Sailing.

As Finn Masters, this decision does not affect us personally, but acutely affects the opportunities open to the hundreds of young sailors we see in our class, and those who might join the class later in life because they outgrew being competitive in any other dinghy. Something very valuable to sailing is in danger of being lost.

We feel this is an injustice and discrimination and therefore, we respectfully urge you to support the Finn to be reintroduced into the Olympic programme after 2020 as the only class on the Olympic sailing programme truly suitable for sailors above 85kg.