Daylight beginning to break after a very tough night – and the first time the crew had really seen the sea state.
pic by Richard Crockett

Today 36 years ago, the 1984 Wilbur Ellis da Gama Race started off Durban, with East London the destination some 260nm away. That night a massive storm hit the fleet, and clobbered it hard, very hard.

This race is still referred to by people who have never sailed before, and yachties too.

This is not the time to rehash all the details of that fateful race, other than what I am publishing now has resulted from a pic I took aboard Assegai during the storm receiving a huge number of comments, likes and more when it came up on my Facebook profile under ‘Memories’ just a few days ago.

People wanted to see more pics, so I have dug the negatives out of the archives, and re-scanned them, plus added a few select ones I retrieved from my archives. Almost all the pics I took aboard Assegai have never been published, so give a first time indication of the conditions out there.

And, I have added the two original reports on the race as published in: As one can see Assegai was well battened down, all sails tightly lashed down, and the helmsman steering very carefully down the very steep waves as the boat was under bare poles. Even a storm jib alone was too much sail.
pic by Richard Crockett

The south westerly wind pushed against the fast south flowing Agulhas current which in turn created massive waves. Wave height is very difficult to estimate, but when one loses merchant ships in troughs for minutes at a time, the waves were high. Plus the waves were breaking at their crests just for good measure.

And all this was at night too. 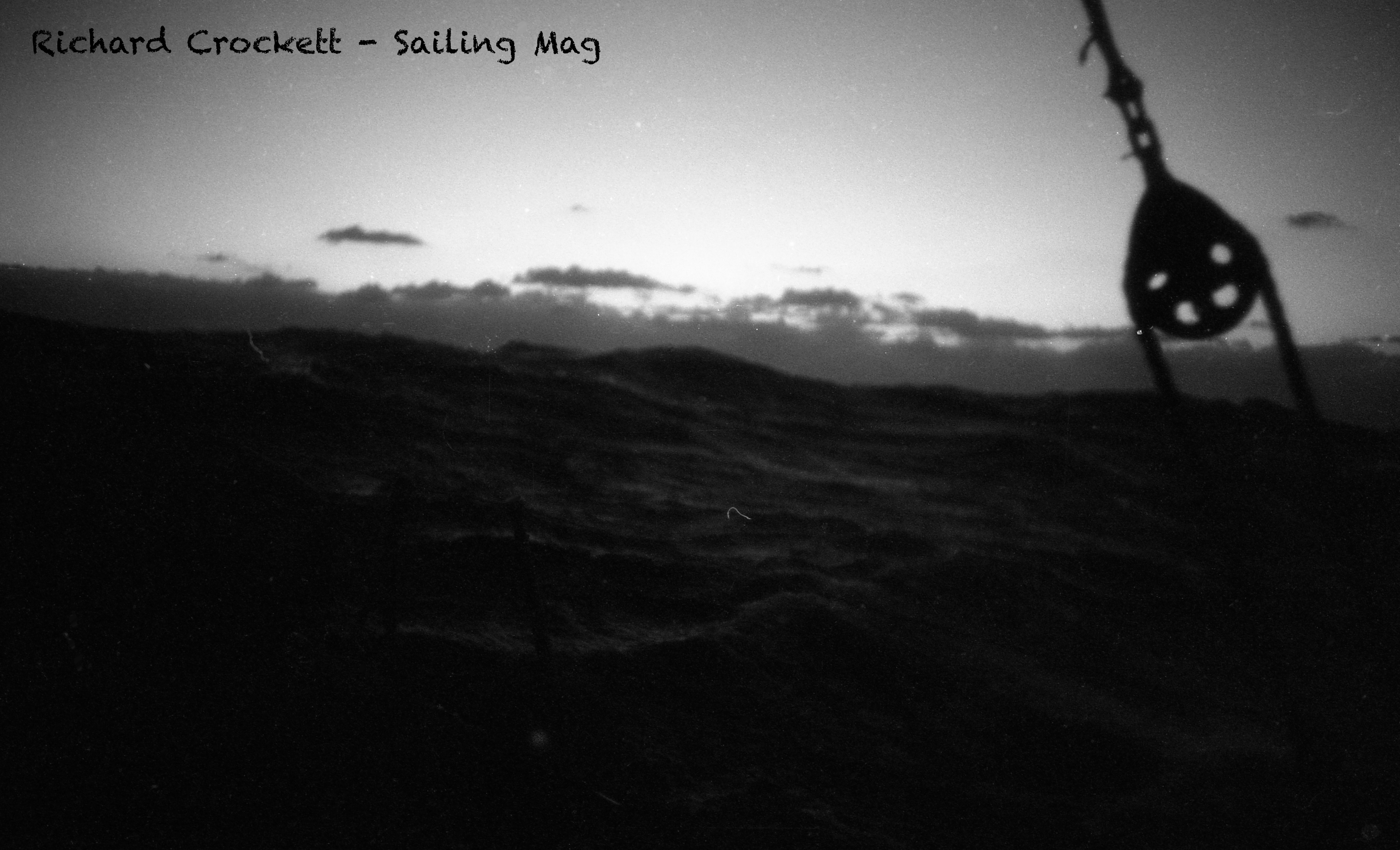 The runner block silhouetted against the early morning sky, and the seas still huge although pictures tend not to exaggerate the sea conditions.
pic by Richard Crockett

In a fleet of 29 boats, one boat, Rubicon, went missing with all hands and has never been seen again. Two sunk and one ran aground on the Wild Coast. The balance of 25 yachts made it back under their own steam or with the assistance of fellow competitors.

Did the boats and crews cope with the severe conditions? I would say yes. Of 29 starters, the statistics look like this:
1 Missing
1 Beached
1 deck stove in when knocked down
2 Sunk
6 dismasted
7 knocked down below 90-degrees
17 No significant damage 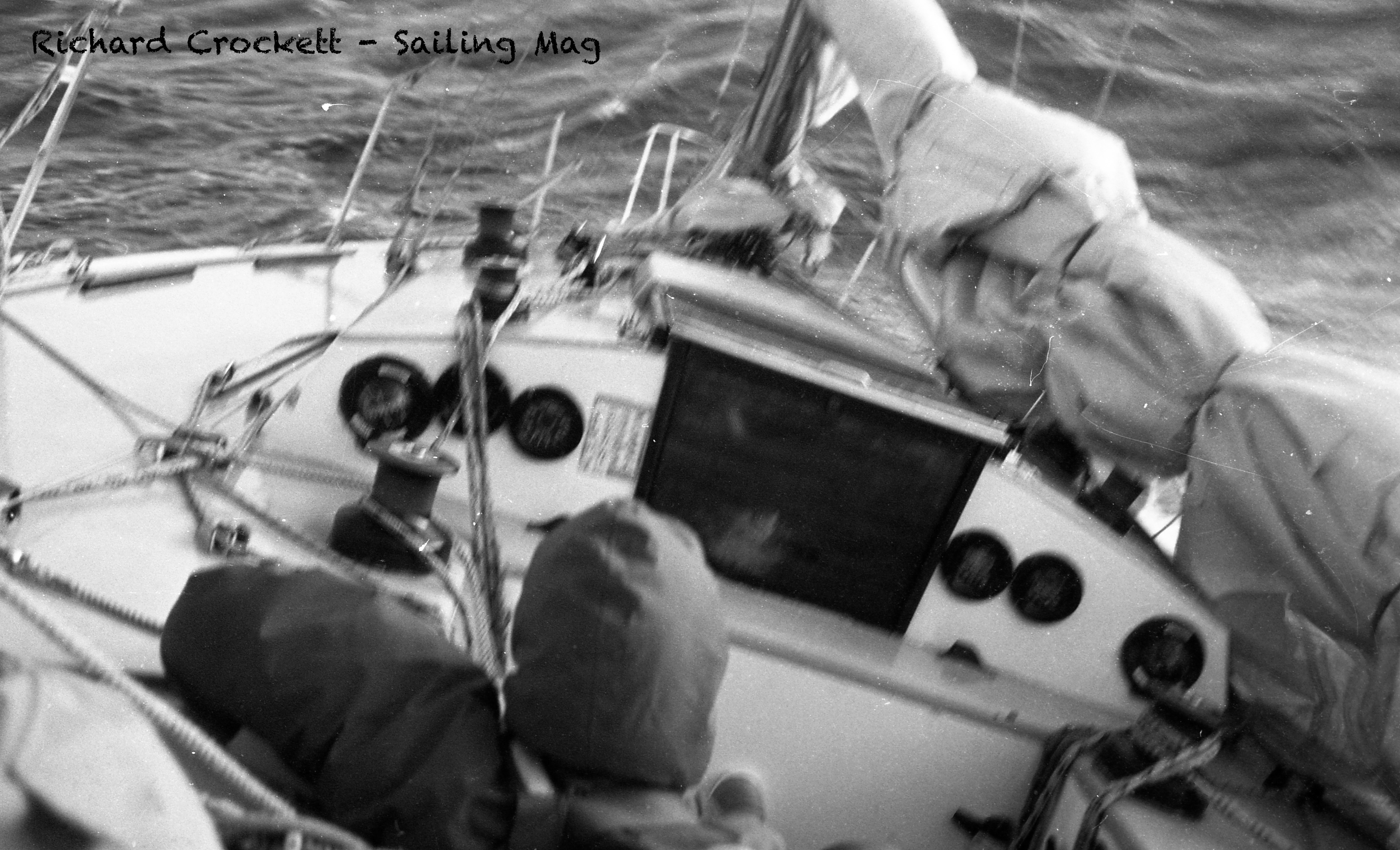 This pic gives a better indication of the steepness of the seas as the bow is pointing way down into a trough.
pic by Richard Crockett

Although a massive search and rescue operation, mainly trying to locate Rubicon and successfully locating Spiffero, was mounted, none of the 25 yachts which survived required outside assistance to return to port (some were towed part of the way by other competitors to speed the return journey). I believe this says a great deal about the calibre of the crews, and the calibre of the boats and their equipment.

I personally feel that should anyone want to share their experiences of that night, I am willing to publish them on this forum – anonymously if necessary, or simply keep them in my archive – which on this race is extensive – as part of the record of that fateful night. Email me: – editor@sailing.co.za 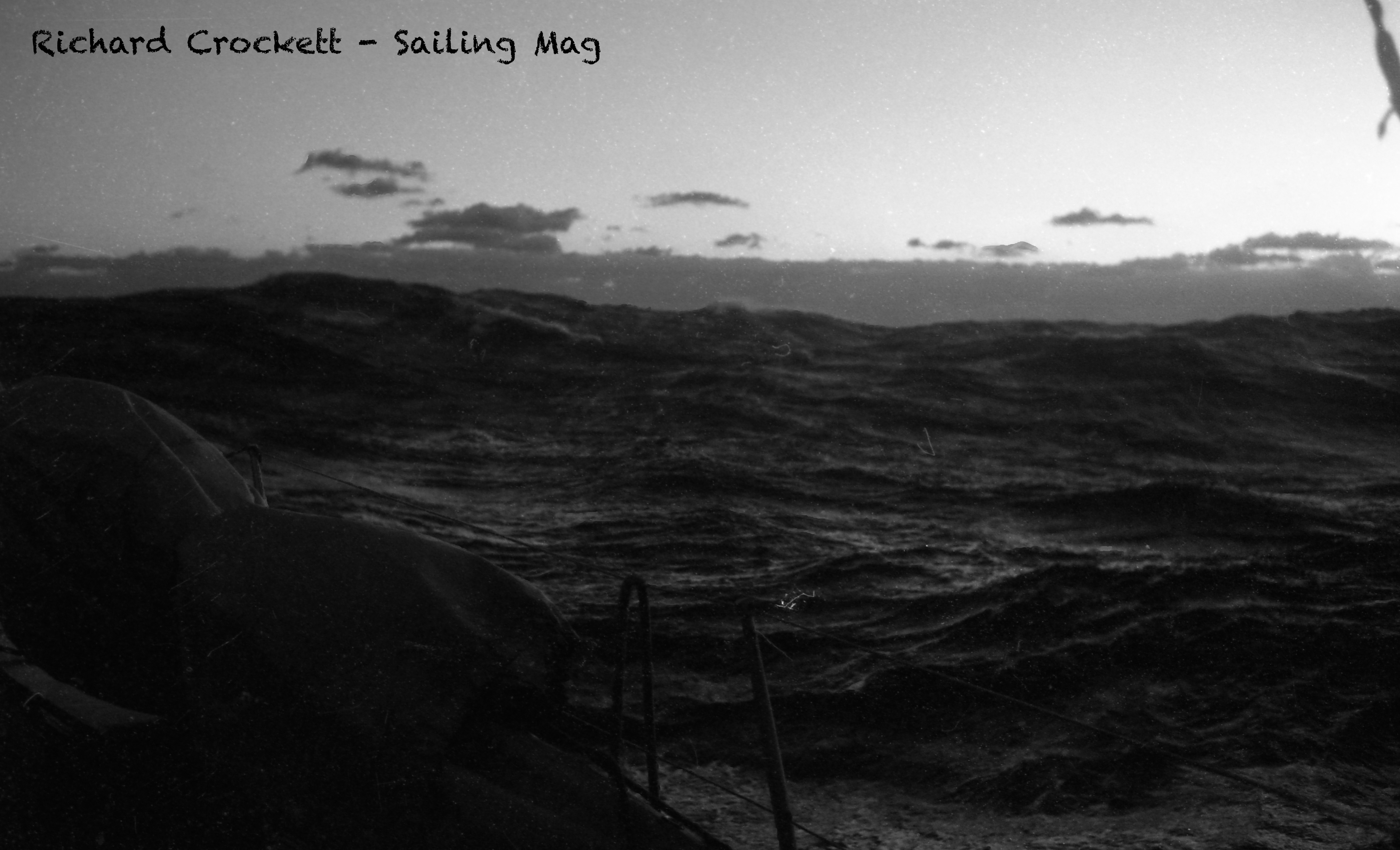 It doesn’t look too bad, but believe me the seas were still massive and the wind was still howling.
pic by Richard Crockett 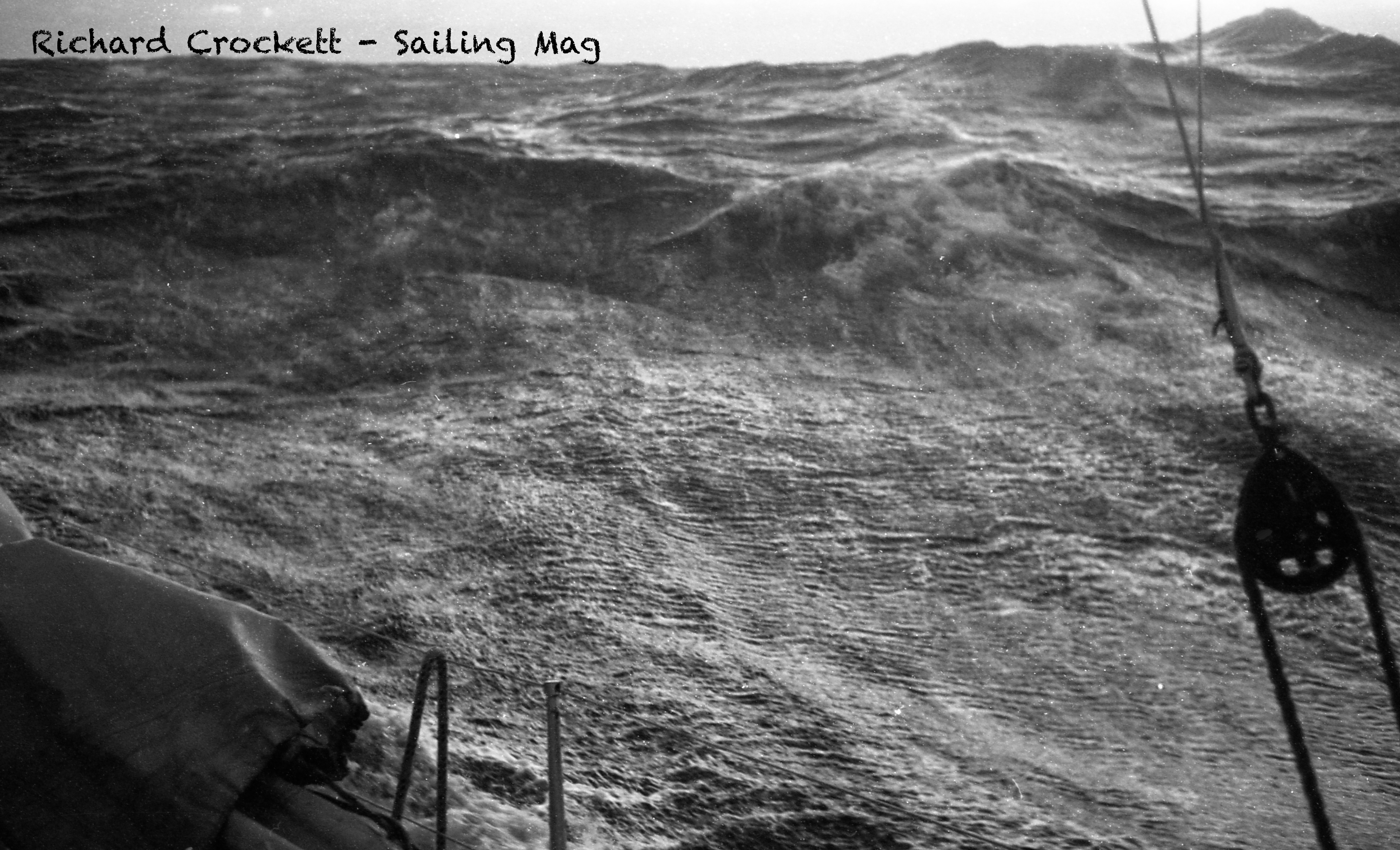 A better indication of the sea state with the wind whipping the top off the water.
pic by Richard Crockett Breaking crests beginning to form behind the boat.
pic by Richard Crockett … and building even bigger.
pic by Richard Crockett 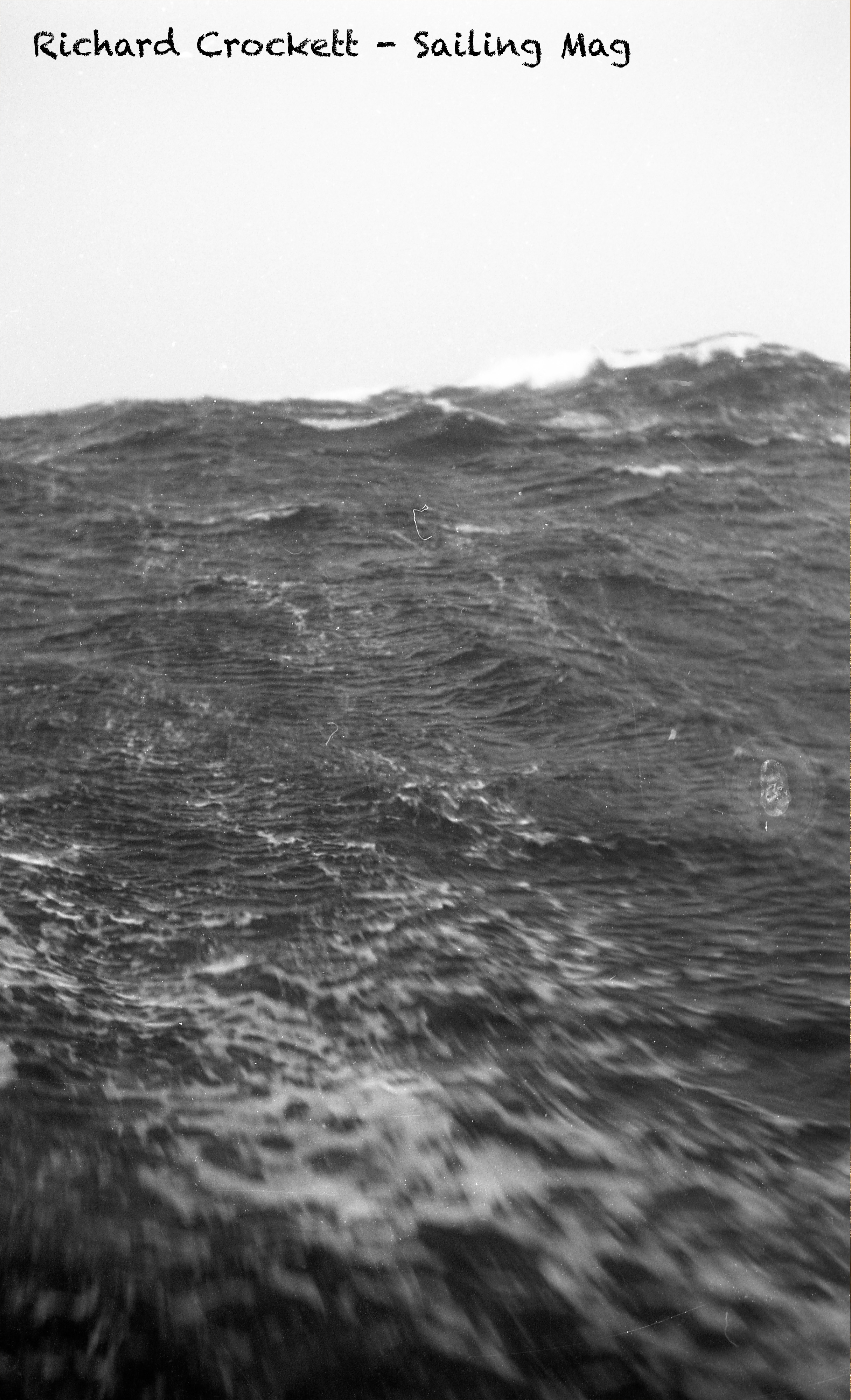 Our stern wake can be seen in the bottom of the pic, with a steep wave and breaking crest building behind.
pic by Richard Crockett 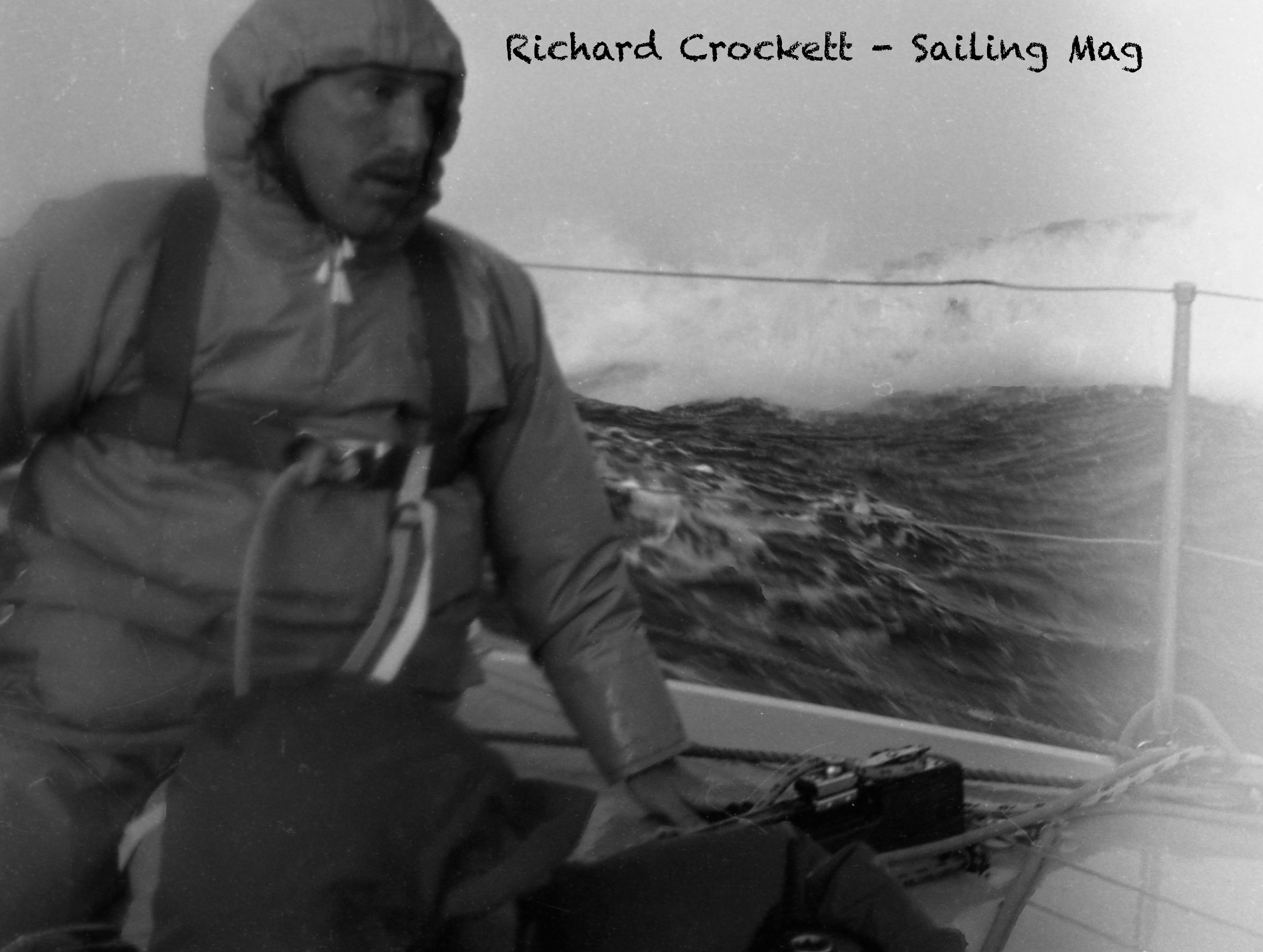 On watch at this time was Warren Burne. Harnessed on with a big sea about to break over the stern.
pic by Richard Crockett More big seas and another crewman, John Bailey, well hunkered down in the cockpit.
pic by Richard Crockett 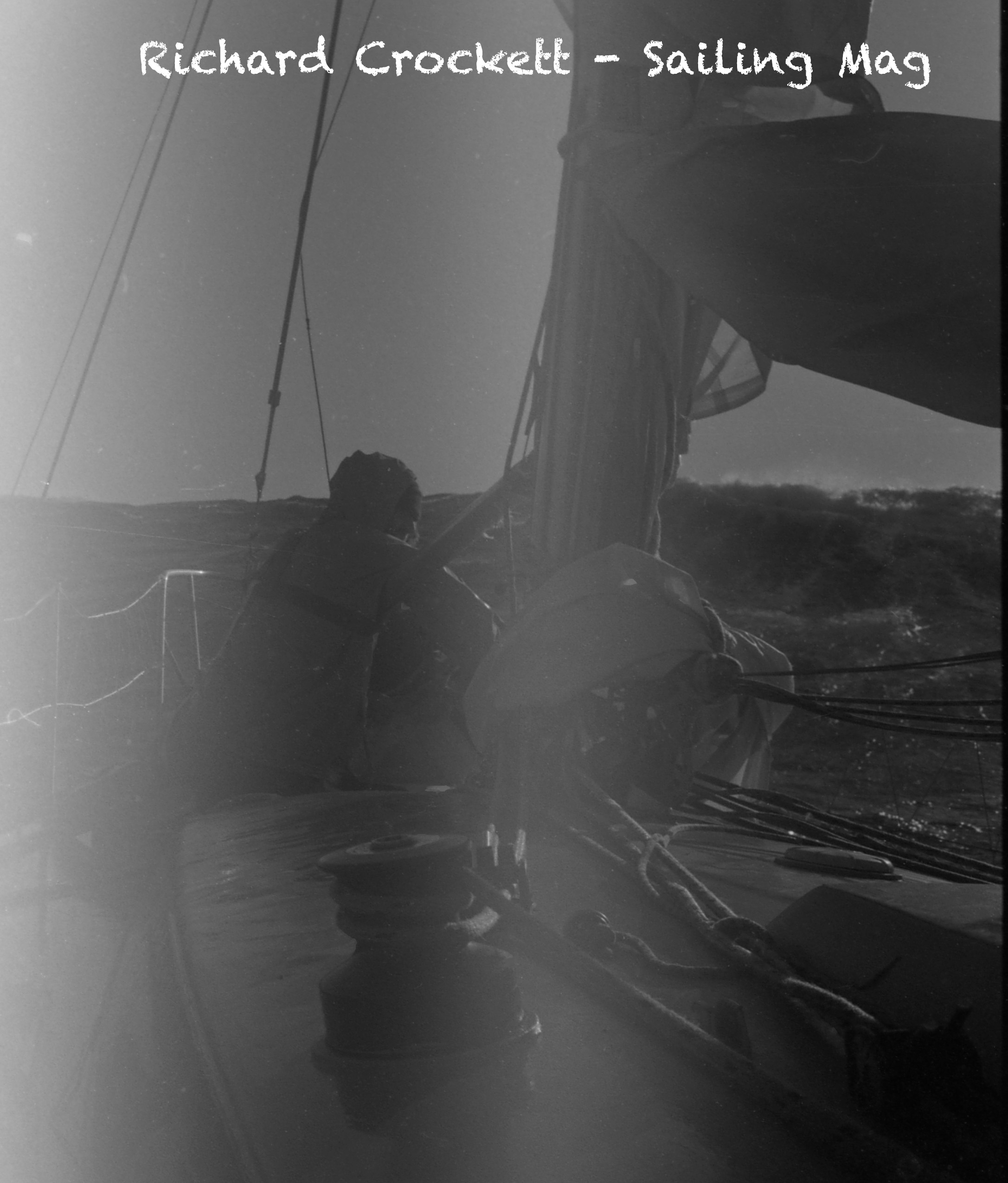 Looking towards the bow a crewman re-lashes a sail as a menacing sea can be seen ahead.
pic by Richard Crockett Reaction attempting to pass inshore of us. Not long after this pic was taken the whole complexion of the race changed as the north easterly wind abruptly stopped blowing, followed literally a few minutes later by a South Wester which just kept building in terms of wind strength, and the size and roughness of the seas.
pic by Richard Crockett 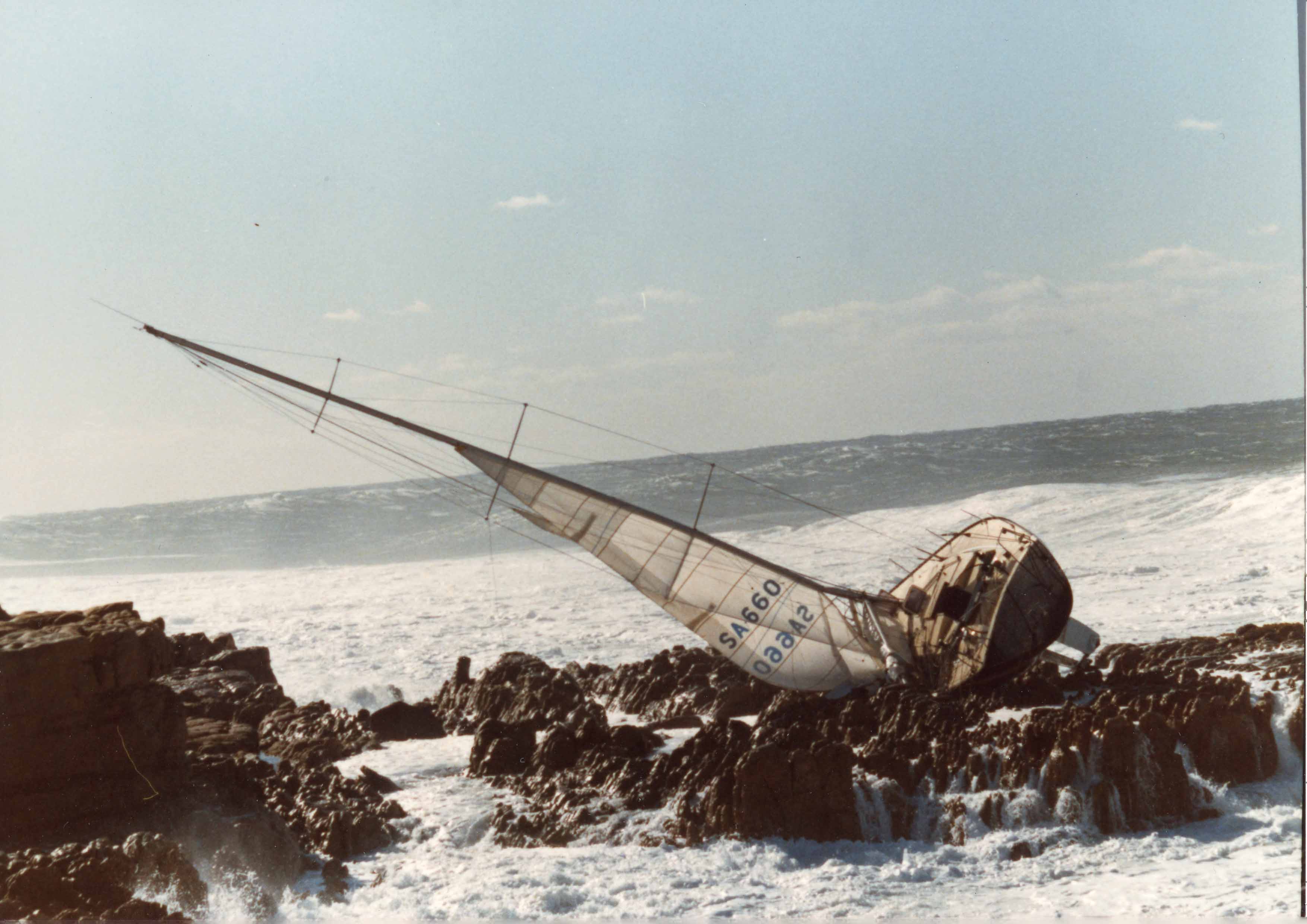 Sensation on the rocks on the Wild Coast. 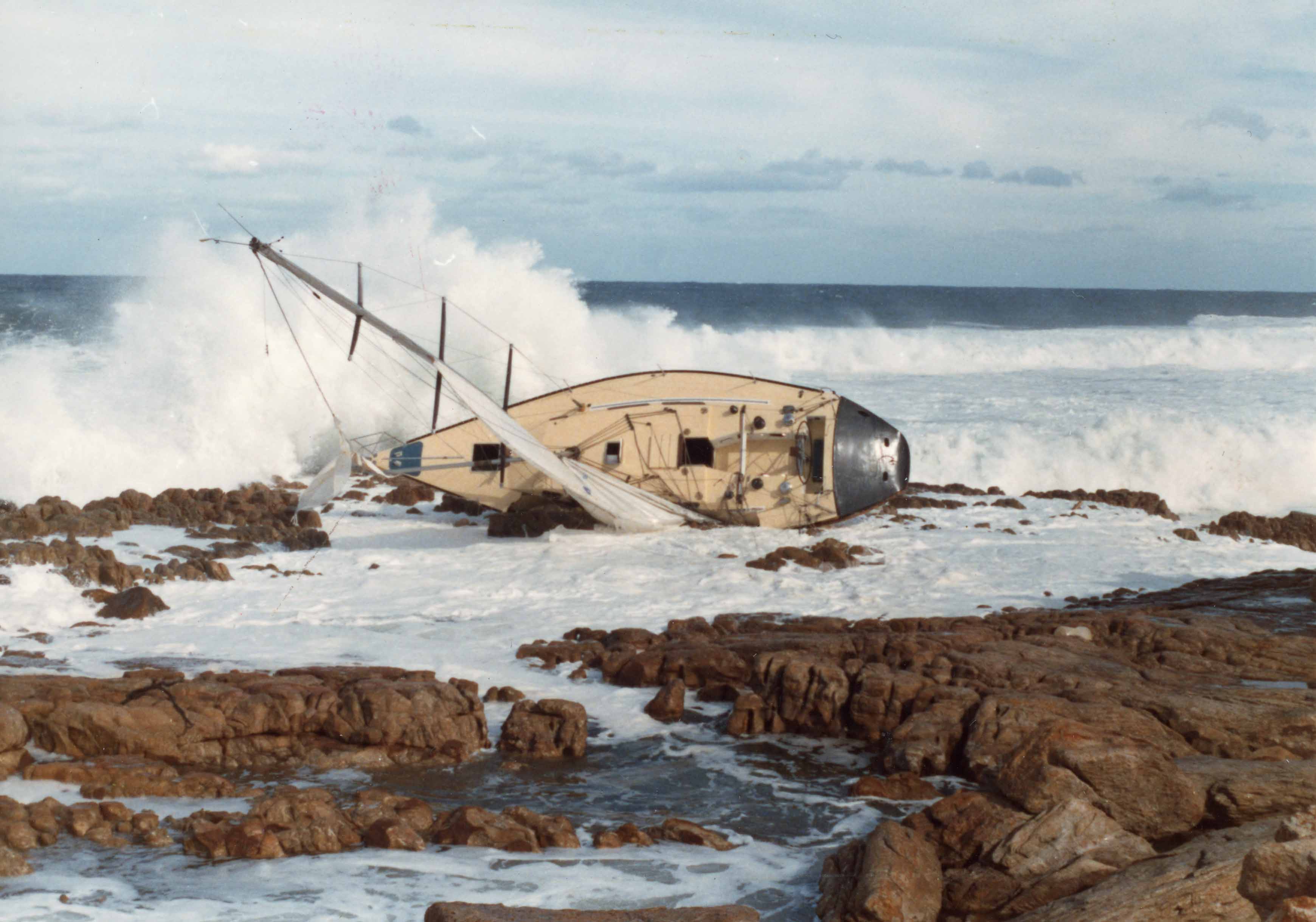 Sensation firmly wedged on the rocks. And this is how she looked from the air – a forlorn sight.
pic by Mike Rushworth